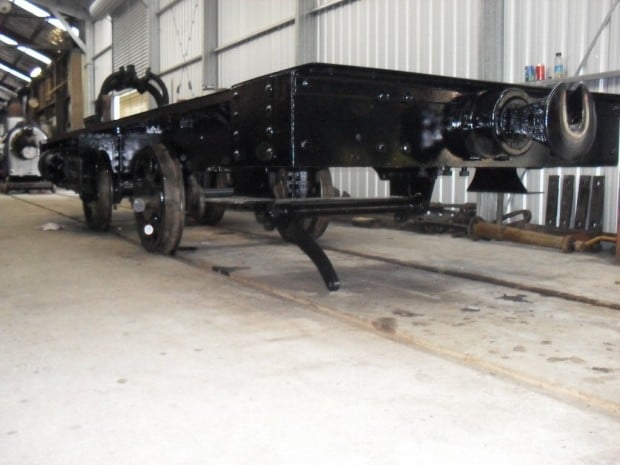 Our small C class locomotive was built by Dubs and Company of Glasgow in 1875, makers number 885,  the last of the class to be built and was delivered to the then isolated Greymouth Section in December of that year. At first the locomotive was not numbered but named Pounamu a common practice at the time. In 1877 it was numbered C 132 and later in 1882 renumbered C 2. When originally built it had a 0-4-0 wheel arrangement but this was changed in 1879 to a 0-4-2 after the addition of a Bissell trailing truck. This was brought about after the locos had a bad tendency to “wag their tails” at high speed. The length of the locomotives frame was altered also at this time resulting in a more spacious cab. A coal bunker was added at the rear of the cab to supplement the two side bunkers.

C 2 was transferred to the Public Works Department (PWD) in 1885 being used on railway construction projects firstly on the West Coast of the South Island before going north to work on the Gisborne railway, then returning to the West Coast of the South Island before heading to the East Coast and then north again to work on the Stratford to Okahukura line. Renumbered as PWD 512 in 1906, it remained in Public Works Department Ownership until 1927 when it was sold to J F Macklay. His ownership lasted only one year when it was then sold to Renown Collieries at Rotowaro. Around its time with Mr Macklay it was overhauled and fitted with a new boiler that was built by Collet and Sons Engineers in Danniverke. Renown Collieries was taken over by the State Mines Department in 1951. The C worked on both coal and Passenger trains around the mine during that time. It was last overhauled in the 1960s when it was fitted with a tank and funnel taken from sister C6 (Neilson 1770) that was also on hand at Rotowaro to provide spare parts. The C remained in service until 1971 when a broken crank pin on the driving wheels forced its retirement.

512 was later in 1971 donated by the State Mines Department to the then Wellington Branch of the New Zealand Railway and Locomotive Society (later Silver Stream Railway) on the 30th of August of that year and was moved to the Seaview storage site arriving there on the 9th of May 1972. Work started later that year on its restoration with view to returning it to service. A lot of work went into repairing the broken crank pin and the rods that were damaged in the incident. A new front headstock was fitted along with several cracks in the smoke box saddle which were ground out and welded up. The boiler was stripped down, cleaned up and reclad. A new mitre dry pipe was fitted and the mitre valves replaced. The injectors were relocated and pipe work refurbished. A new design of grate and ash pan was fitted. The tank and coal bunkers were repaired and a new back was made for the cab fitted. The rear coal bunker was removed making the cab more spacious. The motion work was finished off with a new set of brasses and all the steam valves overhauled or replaced. After being painted 132 as it was again known was test steamed in February 1984 and first used in service on the 9th of May 1984.

A couple of highlights during the C’s years in service at SSR have been: being taken by rail to the Ferrymead 125 celebrations in Christchurch during October 1988. This event was to celebrate 125 years of railways in New Zealand. The loco took part in a cavalcade of locomotives at Christchurch station. Also it had a starring role in the 2003 movie: The Last Samari. The locomotive (and a wagon and guards van from SSR) was taken by truck to the filming site in the Taranaki where a short length of track was laid for them. While they did not move at all during their time there it was still an expensive undertaking for the film’s producers.

From 2000 when L219 as it was then know was withdrawn from service, C132 was the main motive power at SSR being used most Sundays during the year. It passed its 10 year boiler survey in 2005 but it was thought that it wouldn’t be to long before the C required major work however the need for a small engine, kept it in service until April 2008 when it was withdrawn. At this time the L was nearing completion. In December 2008 work started on striping the locomotive down. A major problem was discovered with the boiler, after the clack valves had been leaking allowing water to run under the cladding and cause major pitting to the bottom part of the barrel. . Work on the locomotives chassis has seen the wheels and trailing truck removed and all springing and valve gear removed. The spring gear was well worn and has been rebushed and re attached to the frame. The driving wheel springs were sent away for overhaul also. New material has been purchased to build a new saddle tank.

It is planned to recommence the overhaul in the next few years once some other work is attended to.