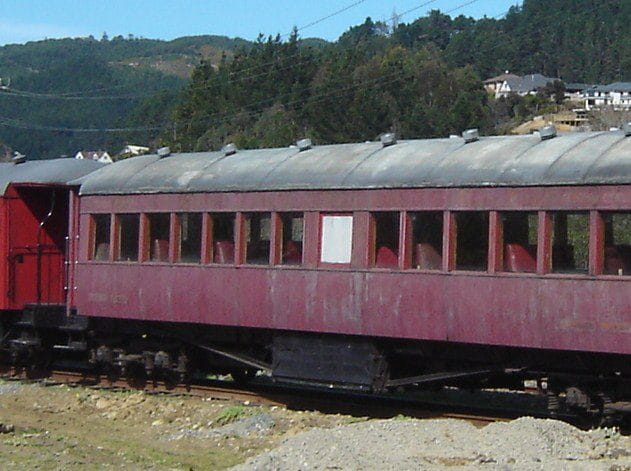 A1833 was built in the Otahuhu Workshops in Auckland in 1935 one of 10 similar carriages out shopped that year. It has retained its as built appearance for its entire life having 2 compartments with seating for 18 passengers in one and 21 in the other in a 2+1 seating arrangement and is now the sole survivor of this type of car although a similar car is at MOTAT in Auckland.

1833 was allocated to Wellington and later Greymouth for its working life until being purchased by the New Zealand Army who intended using the car as a display at the Waiouru Military Museum. It was proposed that the car would be cut in half and then a side removed,  being used to portray the troop trains of the Second World War era. Fortunately this never happened and the car remained stored at the Trentham Army Camp until being donated to SSR in 1993. It was promptly tidied up and returned to service.

1833  was withdrawn from service in late 2009 for a overhaul that is currently underway. We are very fortunate that we have received a number of grants towards work on this Carriage. Thanks to the Rimutaka Trust for the new Roof Cover, The Pelorus Trust for the 2 pack paint and primer for the exterior and to the Southern Trust for the new aluminium sheeting for the recladding of the outside of the car. A huge thank you to these organisations for their support.