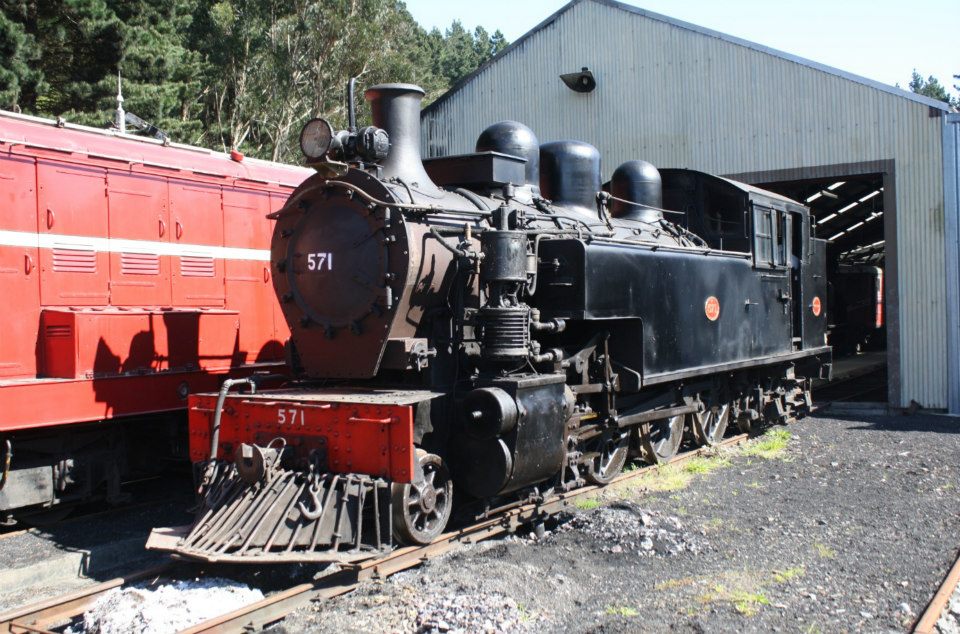 Ww571 was built at the Hillside workshops in Dunedin in 1914 with makers number 147 and entered service on the 4th of November of that year. Initially based in Wellington, 571 was also based in places as far away as Thames and Napier before returning to Wellington in 1936, where it was mainly used on suburban passenger trains until withdrawn from service in 1953 following the introduction of the De class diesel electrics in 1952. 571 was stored along with other withdrawn engines at Hutt Workshops, its future uncertain.

Salvation came after it was decided to rebuild 571 for use in Westport on coal trains. This rebuild was undertaken at the Hillside workshops, and consisted of fitting a new higher pitched boiler with deeper firebox. This drastically altered the appearance of the loco from its original form. Also replaced was the smoke box saddle and cab .The remainder of the loco was given an A grade overhaul and 571 was released back into service in July 1956, and after trials around Dunedin was towed to Westport. Here 571 was used on coal trains to Conns Creek and Sedonville and also on trains to Reefton.

By the end of the 1960 dieselisation was gathering pace and the Ww class members that were based in Westport were only seeing occasional work. Following the failure of one of the 3 Ww’s in Greymouth, 571 was transferred there in April 1969. A second 10” Westinghouse air compressor was fitted to the smoke box and 571 was used on coal trains on the 1 in 26 grade of the Rewanui Incline until withdrawn from service in June of that year. Members of the Wellington Branch of the New Zealand Railway and Locomotive society (later Silver Stream Railway) were, after purchasing there first steam locomotive (Ka935), looking for a medium sized locomotive and after initially actively seeking an A class from NZR, decided on a Ww. A letter to the NZR received a positive reply along with a list of locomotives available for purchase. 571 was chosen as it was in the best condition and in September 1969, 571 hauled a 3 day delivery trip from Greymouth to Picton and then was shipped to Wellington on the rail ferry Aramoana on the 10th of September.

On the 14th 571 hauled a packed 8 car train from Wellington to Taita prior to its delivery to the Gracefeild storage site of the Wellington Branch. The growing collection that the Branch had amassed was stored here until 1973 when it was moved just up the line to the Seaview Storage site. This was to be 571’s home for 11 years before being moved (along with most of the rest of the collection) by rail to the Silverstream site in an operation dubbed “The Big Move”. Restoration commenced on 571 in November 1984 . After stripping down the boiler was cleaned inside and out before it was partly retubed. Several boiler stays were replaced and then it was hydraulically tested before being approved for steaming in October 1986. The running gear was striped , cleaned and repaired as necessary. The cab , tanks and coal bunker were sandblasted and required extensive patching before being painted and returned to the loco.

In February 1988 the loco entered service on the Silver Stream Railway becoming a favorite with crews and the public. After 10 years of regular service on the railway a new dry pipe was fitted and its 10 yearly boiler survey carried out. Also in 1998 571 was taken by road to Hutt Workshops were it was operated for a public open day before being returned to SSR. In 2005 571 was withdrawn from service requiring new boiler tubes and flues and a large amount of work on the frame and running gear

Due to other commitments 571 is currently on display in the depot where is is available for viewing during our special event days.