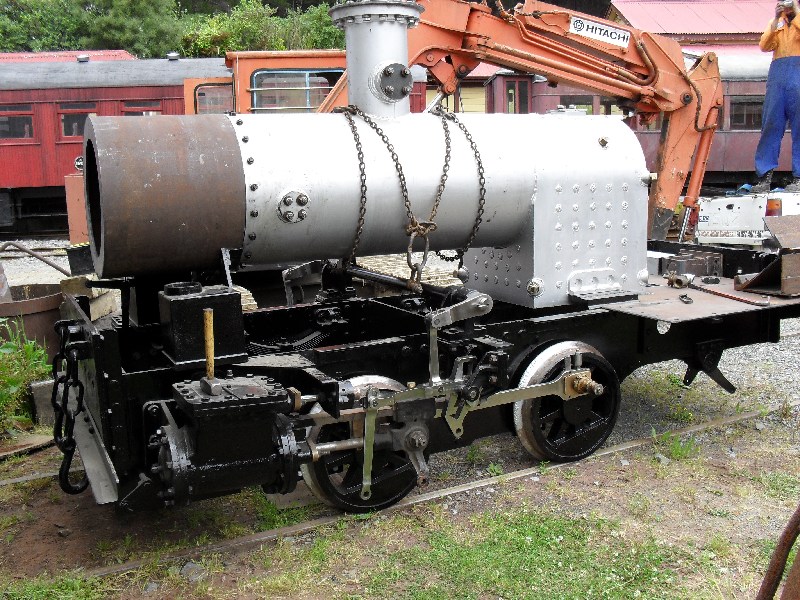 Built in 1921 at the Kilmarnock Scotland works of Andrew Barclay and Sons, Makers number 1749 is now the smallest Ex New Zealand Railways steam locomotive still in existence. Purchased by the Public works Department, 1749 became PWD 531. Like many of its stalemates, 531 had a varied career firstly assisting with the construction of the Stratford- Okahukura line (now threatened with closure) before being moved to Auckland to assist with track duplication work. 531 was then purchased by the New Zealand Railways and was reportedly numbered WW4050.

Beyond this time details become a bit vague. 531 was photographed derelict at Hutt Railway workshops near Wellington in 1955. It was later moved to East Town Workshops near Wanganui being photographed there again derelict in 1959. A year later it was seen, by this time the funnel had been broken off and was lying in front of the loco. 531 was amongst several other steam locomotives that had been withdrawn from service and were awaiting scraping. Of all the locos that were stored at East Town 531 is the only one to survive. After being purchased by Sir Len Southward who intended displaying 531 (and 2 other steam locomotives) at his then fledgling car museum at Paraparaumu, 531 was firstly taken by road to his factory in Petone where is was stored before Sir Len sold the loco to the Tokomaru Steam Museum in 1981. Here 531 was striped down , sandblasted and primer painted along with a few other small jobs. In 1990 531 was again moved, this time to Nuhaka near Wairoa after it was sold to Roy Currie. Again only a small amount of work was undertaken the questionable condition of the boiler was a major hurdle that had to be overcome before the loco could return to operation.

In 2001 the newly formed Hawkes Bay Steam Society (HBSS) purchased 531 from Mr Currie and transported the many parts of the loco to Napier Engineering where an extensive restoration was started. Firstly the mass of parts was sorted through to see what remained and the overall condition. Pleasingly the only major part missing was the Funnel. Thanks to the Blenheim Riverside Railway 531 now has a correct Barclay funnel. The Chassis was the first part to be tackled. The bent headstocks were repaired and reattached to the frame with new mounting angles. The driving wheels and axle boxes were overhauled and returned to the frame after new springs were made. The cylinders were removed and bored 1/4″ oversize and new pistons, rings, piston rods and slide bars made and fitted before these too were reunited with the frame. A new cab , coal bunkers and water tanks were also built to replace the badly corroded originals. After a number of inspections the old boiler was deemed to be unfit for any further service so the HBSS decided to fundraise to have a new boiler fabricated.

The design work was undertaken before quotes were sought for its manufacture. Napier Engineering were the preferred builder and they commenced construction in 2004. As it was a “fill in” job it was many years before the boiler was completed. In 2008 an approach from several members of Silver Stream Railway (SSR) saw a lease agreement signed in which the locomotives restoration would be completed and then run at the SSR to allow HBSS to regroup and investigate options for the locomotive in Hawkes Bay. 531 moved again by road in May 2009 to SSR. When the loco arrived it was apparent that while a lot of work had already been undertaken there was still much to do. The driving wheels required reprofiling so these were removed, turned then refitted after some small jobs were finished on the frame. The new welded boiler had several small jobs attended to before it was blanked off for a hydraulic test. With the test passed it clearedthe way for the boiler to be fitted to the frame. With the boiler fitted attention then turned to lagging and cladding the boiler. The water tanks were then finished and also fitted allowing the pipe work to be fabricated. The cab was fitted after painting and the small jobs attended to before 531 was steamed for the first time in over 60 years. Once the final finishing work was completed 531 entered service in September 2012 and is in semi regular service.