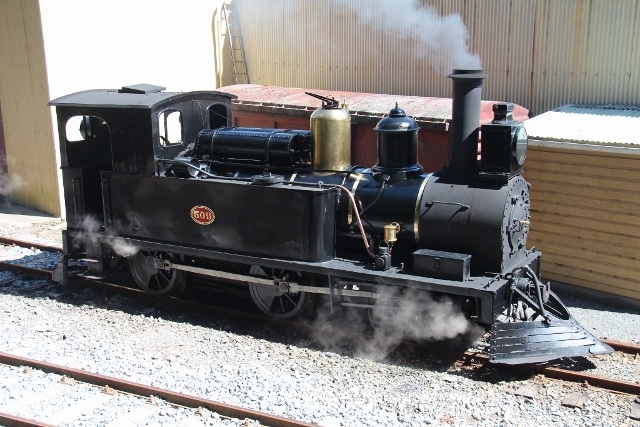 Ten L class locos were built by the Avonside Engine Company of Bristol in England. Built in 1877 our loco (makers number 1207) entered service in Wanganui in 1878 and was initially numbered L30. Renumbered L21 in 1882 and later in 1890 became L219. The locomotive was transferred to Wellington in 1888. Here 219 was used on trains around the greater Wellington area before being sold to the Public Works Department (PWD) in 1903. The locomotive was then known as PWD 509 being used on construction work, firstly on the North Island Main Trunk line and later on the Raetihi branch line.

509 later moved north, were it was used on construction trains around Whangarei before being sold in 1949 to Wilsons Portland Cement Company for use at their quarry and cement works at Portland near Whangarei. Here 509 became number 8 and joined the other 2 ex PWD L class locos 507 and 508. Fitted with a new boiler built by A and G Price early in its new career at Portland, number 8 had a number of spotting features to distinguish it from the other 2 L locos, the 2 most obvious being its Price cast iron smoke box door (as fitted to a number of bush tramway locomotives ) and its NZR sand dome that was moved to a position between the steam dome and cab. Fortunately it still retained its 509 number plates throughout its working time at Portland.

In 1974 the loco had become surplus to requirements at Portland and it was donated to the Wellington Branch of the New Zealand Railway and Locomotive Society (later Silver Stream Railway). Moved to the Seaview storage site shortly after it was returned to steam in 1979. It became the first steam locomotive to run on the re-laid Silver Stream Railway on the 23rd of March 1980 after it was trucked to the site from Seaview. Initially it was numbered again as 509 but later changed to 219. At Silver Stream a Westinghouse air braking system was refitted. 509 was the only PWD L class to be fitted originally. Also a new funnel flange was fitted after the funnel was trimmed down during its time at Portland. The Sand dome was refitted to its original location between the funnel and steam dome and a bar type cowcatcher was fitted to the front of the loco.

In the late 1980s 509 was taken out of service for some major work including retubing the boiler. After re-entering service in 1989 it was used over the next 11 years before being laid up requiring major work on the internal steam pipes and the running gear. The loco was jacked up and the wheels and spring gear removed for overhaul. The driving wheels were taken to the Glenbrook Vintage Railway to have the tyres turned. The front pony truck was also stripped down but the wheel set was discovered to be cracked and unsuitable for future use. A wagon wheel set was altered to suit and fitted. A new dry pipe and steam pipes in the smoke box were also fitted. With other priorities the overhaul became sidetracked from 2003.

In late 2007 ONTRACK approached Silver Stream Railway with the idea of using the locomotive to help celebrate the opening of the North Island Main Trunk Railway. After several meetings the idea turned into a fully fledged plan, that the locomotive would head the re enactment of the Parliamentary Special. The original train ran in August 1908 and carried members of parliament from Wellington to Auckland to see the American Great White Fleet. Work recommenced at once with the new axle box bearings finished allowing the engine to be lowered back on to its wheels for the first time in 7 years. Work then focused on the boiler with the cab, tanks, and boiler cladding stripped off allowing the boiler to be prepared for hydro test which was undertaken in March 2008. Over the following few months the loco was reassembled and the boiler was steam tested in July. On the 3rd of August 2008 L509 was craned on to a truck and taken by road to Ohakune where it undertook load trials prior to leading the re-enactment train on the 7th of August. After another 10 years of service, 509 was taken out of service after Queens Birthday Weekend 2019, requiring a major boiler overhaul on the 73 year old boiler. A new firebox has been purchased from England as part of this work.