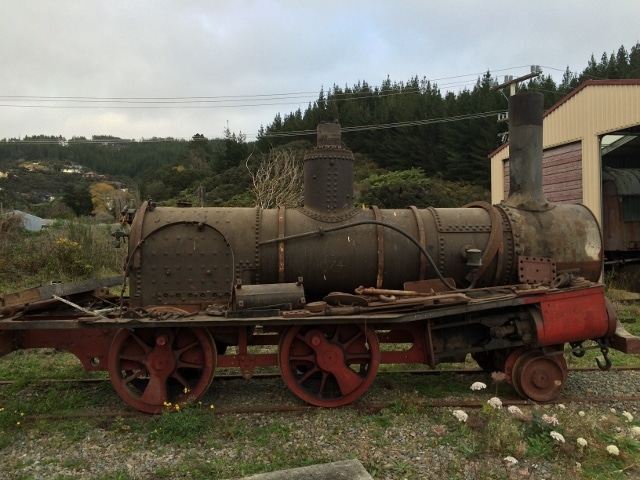 D143 was built by Neilson and Company Glasgow Scotland in 1874 maker’s number 1847. The locomotive was one of  the first of 22 D class locomotives built by Neilsons and also Scott Brothers in Christchurch New Zealand. Entering service in April 1875 143 became the first locomotive allocated to the Isolated Nelson Section. In 1882 it became D1 and in 1890 D143. 143 was first used on construction trains on the Nelson Line and later on Goods and Passenger trains. It was transferred to the also at that stage isolated Gisborne section working here till 1911 when it was shipped to Auckland remaining there until withdrawn in March 1916. In 1917 143 was sold to the Dominion Portland Cement Company just south of Whangarei. They later changed their name to Wilsons Portland Cement Company. Here the D worked mainly on quarry trains.

D143 was cosmetically modified with a rear coal bunker and many other smaller modifications. It was in service here till 1968 when it was withdrawn. Later 143 was donated to the Wellington Branch of the New Zealand Railway and Locomotive Society (later Silver Stream Railway) being moved first to Gracefield and later to the Seaview storage site before being taken by truck to the Silver Stream Site in 1980. In the late 1980s a restoration project commenced. A lot of work was undertaken including removing the wheels and overhauling the axle boxes and spring gear. The front pony truck was also overhauled. A new smoke box bottom was fitted and most of the steam mitres were overhauled also. The overhaul was stopped in the early 1990s. In 2010 143 was moved into our  storage shed. In late 2016 SSR approached the Nelson Railway Society with an offer to lease the locomotive for 20 years with a 20 year right of renewal and move it to Nelson to overhaul and operate the locomotive. This offer was accepted in June 2017 and 143 was moved to Nelson in April 2018 . Over the next 12 months SSR became aware of some conditions of the lease or best practices that were not being complied with , the end result being that the Nelson group chose to relinquish the lease and return 143 back to SSR. It arrived back in September 2019 and has gone back into storage with no current plans to restore the locomotive.