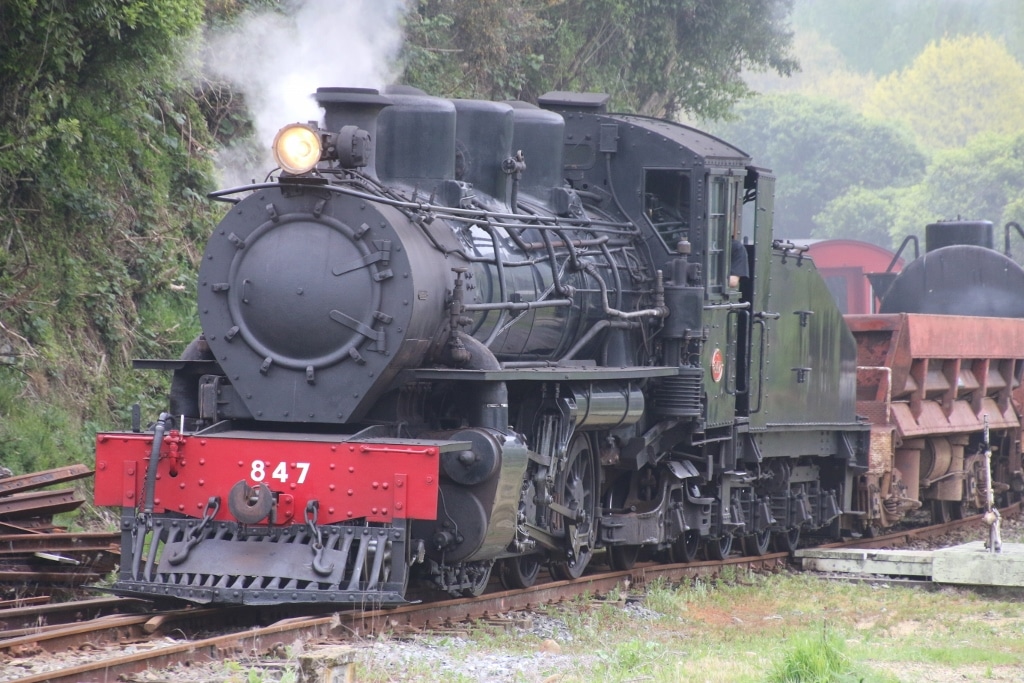 C847 was the third C class heavy shunting locomotive built at Hillside Workshops is Dunedin in 1930 maker’s number 255. The C class were designed as heavy shunting engines with a light axle loading to allow them to be used on wharves and other light track. Until the time of their design most shunting had been done with older obsolete classes of locomotives. Twenty four C’s were built 12 each at Hillside and Hutt Workshops. They saw service mainly in Auckland, Wellington and Christchurch. C847 was initially based in Dunedin but was transferred north to Christchurch in 1934. There it spent the rest of its working life shunting around Christchurch and also on branch line trains to places like Oxford, South Bridge and Whitclifffs.

C847’s tender was changed during its life to the one previously used on C846. The loco was originally scheduled for retirement in 1966 but remained in service until 1969. During this later period of its life it was used on a double headed C excursion to Cass with the only other preserved member of the C class, C864 now at Ferrymead in Christchurch. After withdrawal 847 was originally set aside as a source of spare parts for 864. The Wellington Branch on the New Zealand Railway and Locomotive Society (later Silver Stream Railway {SSR}) upon hearing on 847’s fate decided to purchase the locomotive (much to the Canterbury branch’s disapproval at the time). It was hoped that the loco could be steamed to its new home. Those aspirations were quickly dashed when it was discovered that the loco had already been a donor and many parts were missing. In the end 847 was towed north to Wellington in 1974 suffering from a hot front axle bearing on route. It was stored at the Seaview site until 1984 when along with most of the rest of the collection was towed to the Silverstream site in an operation named “the big move”.

C847 was stored at the SSR until 1990 when following a successful application for Lotteries funding, the loco was taken by road to the Glenbrook Vintage Railway (GVR) in south Auckland for overhaul back to mainline standards. The loco was in quite poor condition when it was received at GVR and was a major project for them. After the loco was completely striped down and the boiler removed from the frames, it was discovered that it was solid with scale to the top of the tubes confirming why the loco did not steam very well in its later years of service. Fortunately the boiler was not in bad condition and after new tubes and flues were installed it was refitted to the overhauled chassis. Major work was undertaken on the chassis including new springs, a new rear wheel set that had roller bearings fitted, and all the tyres turned. The tender also required major plate repairs. It was outshoped in 1994 and used initially on trains at GVR.

C847 was used a number of times on the mainline including a trip to Huntly and another to Hamilton. It was returned to SSR again by road due to costs in 1998 and has been in service since. Some major work has been undertaken in recent years at SSR including a major rebuild on the regulator. This involved fitting new Stainless steel seats and valves along with a new cam shaft. Another major project involved the main pistons and valves also came in for a lot of work, requiring the valve bores rebored and new rings made for both the pistons and valves. The boiler was retubed in 2008.

After being in service almost continually for 22 years, 847’s last run before overhaul was at our Santa Special on the 4th of December 2016. It now requires a fairly major boiler overhaul, which will include the fitting of new boiler flues and tubes, tubeplate repairs, along with a new smoke box and ash pan. With other priorities at present, such as getting more of our fleet of rolling stock under cover, 847 will remain complete so it is able to be viewed in the shed during special event days.