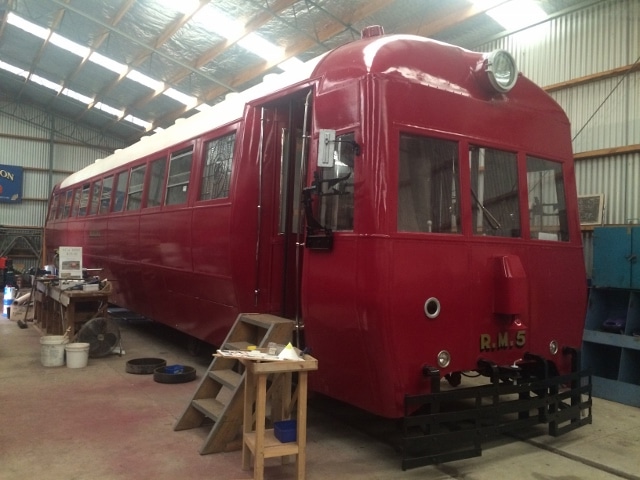 Built in 1936, R.M.5 was one of 6 Wairarapa Railcars principally designed for use over the steep Rimutaka Incline railway between Upper Hutt and Featherston. The section between Summit and Cross Creek used the Fell Centre Rail for adhesion and braking. As this rail sat up higher than the running rails the car was designed to clear it. Originally powered with a Leyland petrol engine this was later changed to a Leyland diesel to lessen the fire risk. Mainly used between Wellington and Masterton the Wairarapa railcars did occasionally venture further afield to places like Gisborne. After the Rimutaka Incline was closed in 1955, being replaced by an 8.8km long tunnel, the 6 Wairarapa railcars were withdrawn.

Stored at Hutt workshops along with several sisters R.M.5 along with 3 others (R.M’s 4, 6 and 9) were purchased by the Wellington Branch of the New Zealand Railway and Locomotive Society (later Silver Stream Railway). Moved a short distance up the Gracefeild branch line and later Seaview, R.M.5 was chosen as being the one in the best condition structurally and mechanically and a start made on returning it to operation. The “Flying Tarpaulin” as it became know was a popular attraction at open days at the Seaview site. The bodywork being covered in tarpaulins due to its poor condition. It was moved by road to the Silverstream site in 1980 where work continued on improving its condition.

An approach by the newly formed Pahiatua Railcar Society in the early 1990s, to restore R.M.5 to mainline running standards saw the car head to Pahiatua in 1992 on lease for 20 years with a right of renewal for a furthur 20 years. Here major progress has been made, with the timber framed body work being completely replaced with a new steel frame and work is currently focusing on the finishing details.