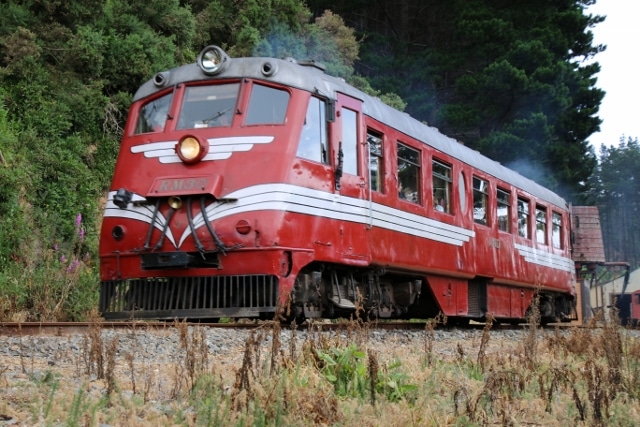 Built in 1938, R.M.30 was the first of 6 Standard railcars. They were designed with a driving cab at each end and seating in two compartments with a centre toilet. When built R.M.30 had seating for 36 passengers in second class and 12 in first class. This was changed later when the first class seats were removed and 16 second class seats fitted in their place. The original Leyland Diesel engines were replaced in the early 1950s with Meadows diesel engines. They are mounted under the driver’s seat at both ends.

R.M.30 had many colour scheme changes over the years, originally being painted silver with a green strip, this was later changed after complaints that the railcars were hard to see at level crossing, forcing New Zealand Railways to paint them all over Red with a grey roof. Later it had silver flashes painted on and the roof colour also changed to silver. The standard railcars were all named after Maori Canoes, R.M.30 being named Aotea. Mainly used in service in Hawkes Bay, between Napier, Wairoa and Gisborne and later between Wellington and New Plymouth. On a enthusiasts excursion in 1967,  R.M.30 made the trip between Auckland and Wellington in 9 hours and 26 minutes with a total running time of 8 hours and 42 minutes, a record it still holds.

Last used on the run between Wellington and New Plymouth, R.M.30 was withdrawn and sold to Silver Stream Railway in 1972. Originally stored at the Seaview site, R.M.30 was transferred to the Silverstream Site in 1984. After a repaint in the late 1980s it returned to service on the railway being used sometimes as a supplement to the regular steam hauled trains and on other special occasions.

R.M.34 was also purchased in the 1970’s and was used on a number of occasions at the Seaview site before being moved to Silver Stream Railway in 1984. Some restoration work was carried out after it was brought into covered storage in the late 1990’s. In 2019 R.M.34 was gifted to the Pahiatua Railcar Society and moved to their site in March that year.