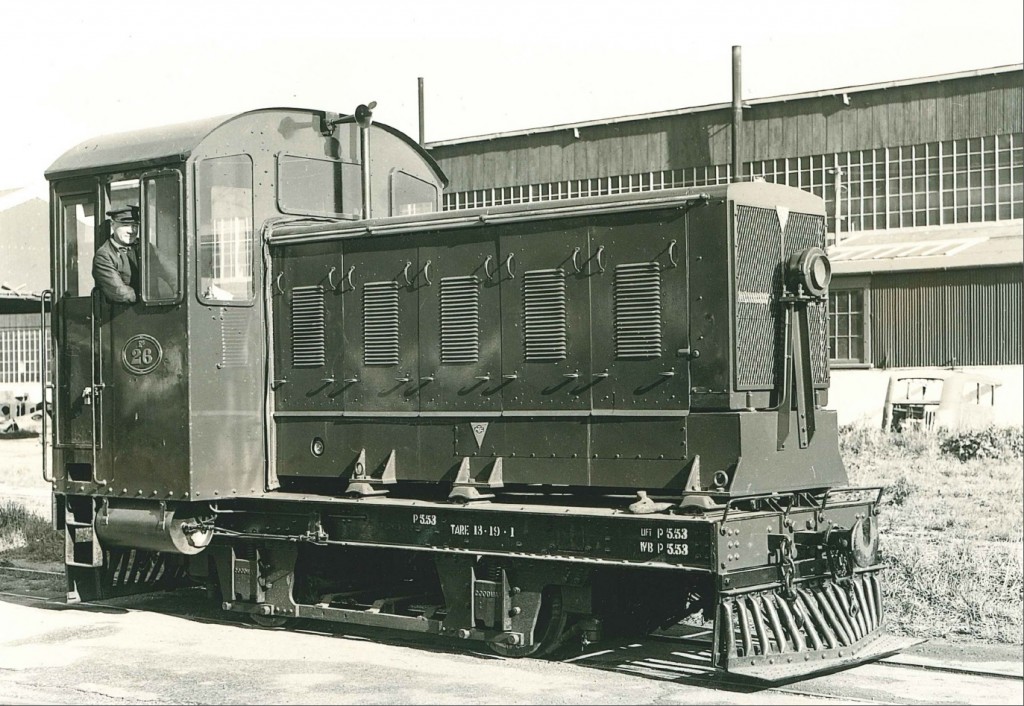 Eb26 was built by NZR at the Hutt Workshops using componants supplied by the Goodman Manufacturing Company in the USA in 1929, originally as a battery electric locomotive. It was based at the workshops for many years being used on light shunting duties in the car and wagon workshop. Over time the storage batteries started to fail so a war surplus AEC generator set was mounted on the original underframe along with a new cab in 1953. The generator was hooked up to the original traction motors converting the loco into a diesel electric.

It remained based at Hutt workshops until transferred by rail to Napier workshops somewhere around 1970. Around this time the original AEC engine was replaced with a Gardner 6LW unit. 26 remained in service there, until the workshops closed and it was driven under its own power to the new Pandora locomotive depot in 1990. Still earning a living over 65 years after it was built, until due to its pretty worn out condition the loco broke a wheel centre in 1997. It was removed from the rails and sat facing an uncertain future until being rescued by a group of 4 Hawkes Bay based rail fans with the help of the Rail Heritage Trust. 26 was shifted to a property in Eskdale where work to restore it got underway in 1998. Fortunately 2 spare wheel sets were available ex Eb29 that was stripped for parts in Napier in the 1980’s. the loco was later shifted by road to a property in Awatoto near Napier where the restoration was almost completed. Over the years the loco was fitted with the wheels ex Eb29 after new brass bearings were cast and machined. The springs were also replaced. New hood panels were fabricated and the cab and hood doors were stripped, repaired and primed. The engine was thoroughly serviced and the generator and traction motors checked and repaired as required. Both cab side doors were replaced and all the cab windows were reglazed with new frames. Both headlights were overhauled along with all of the cab fittings and gauges. The owners felt that the loco should go somewhere close to its original home where it would be used so it was gifted to SSR in 2014 and moved to site in August 2015 where it is undergoing final repairs and painting before entering service as a workshops shunter close to its original home.